I decided to start this blog post series off with the KNN Classifier because it is easy to understand conceptually. KNN stands for K-Nearest Neighbours and in essence it looks at a data point, and then looks at the N closest other data points (where N is a number defined by us) to determine how to classify it.

Imagine we have 1,000 data points of players, their match stats and how many brownlow votes each player got for those stats. We know things like Disposals, Kicks, Clearances, Goals etc. Now we get given match stats for a player and are asked to predict how many votes that player will get. The KNN model would look at which of the N data points we’ve already seen are closest, and take a weighted average of the votes from those players, depending on how closely they resemble the player we are analysing.

A more detailed description of KNN can be found here.

Before getting too carried away I like to just run a baseline model to try and iron out any kinks in the data structures and get a feel for how the model behaves. When using a library like scikit-learn running models is cheap and easy. We’ll be able to run lots of tests on lots of models to see what works and what does not. Once we have that information it becomes easier to brainstorm ways to further increase predictive power and overcome inherent limitations of the problem we are solving.

Note: I’m going to leverage some helper methods from an earlier post as we go along.

The code snippet above show just how easy it is to train a model using sklearn packages in Python. Once we had our data separated into feature sets (match stats), and target variables (Brownlow Votes), all we had to do was create a new instance of our model and call the fit() method, passing it our training data.

To run this model we just need to create an app.py with the following code

then from our command line we can just run

In a few lines of code we’ve training a classification model and can use it to predict brownlow votes from any new data (e.g. 2019 Match Data). Before we get too carried away with our genius, let’s have a look at how the model performed.

The confusion matrix for the base run is shown below. There are some interesting things we can glean from this. Firstly though, let’s go over how to read a confusion matrix. 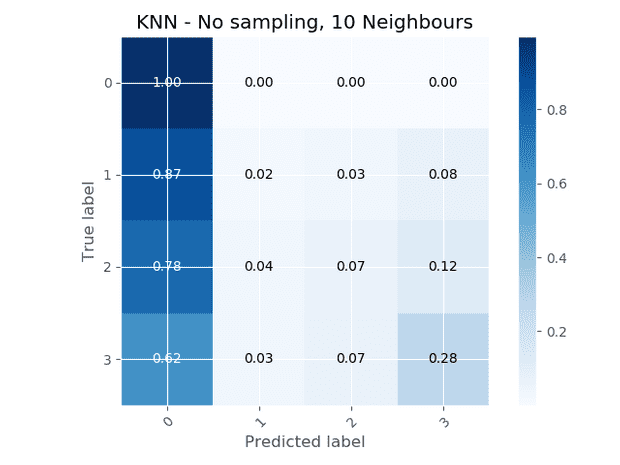 For a true label of X, a label of Y was predicted Z % of the time.

For example. The top left most square is read as:

This means that in every instance in the validation set, players who actually got 0 votes were predicted to get 0 votes 100% of the time. In other words, the model never predicted a single vote for a player that didn’t actually receive a vote.

Now that we understand how to read a confusion matrix, it should be apparent that all the rows must sum to 1.0. This is because if 100% of out 0 vote players are predicted to get 0 votes, then how can we also predict 0 vote players getting 1,2 or 3 votes?

While we might thikn that 100% accuracy on 0 vote games is good, let’s move onto the other labels (those that represent players who actually got votes.)

The confusion matrix is showing us that most players are predicted to get 0 votes, regardless of how many votes they actually got. There is a very simple explanation for this!

Most players in a game of AFL will not get any Brownlow votes. In fact only 3 players across both teams will get any. This means that when our model was trained, most of the data it saw was for 0 vote players. That means that the model could be fairly accurate just by blanket estimating everyone to get 0 votes.

Here’s the accuracy/precision of each label for this model

Given that 94.3% of the data is labelled as a 0 vote data point, the actually accuracy of this model is not that good. It predicts some obvious 3 vote games but mostly assumes people won’t poll.

We can make a small tweak here that will improve model performance dramatically. Let’s remove 90% of our 0 vote data points from the training set. This should mean there are roughly as many data points where players got 0 votes as those that got 1,2 and 3.

We’ll make a quick change to some code to allows us to pass a sample_probability flag for 0 vote players in the training set.

then a quick change to app.py 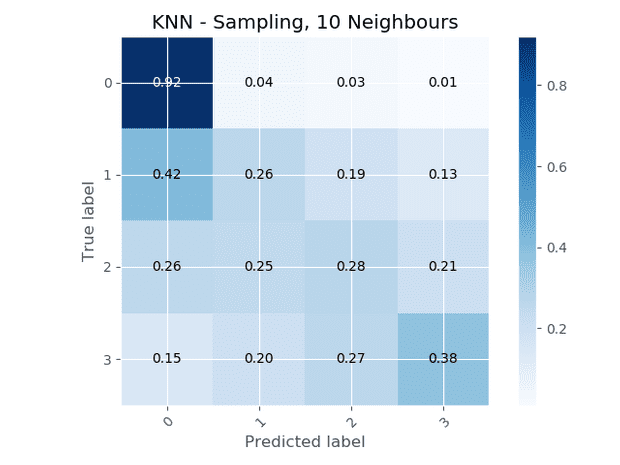